This weekend (17.07. – 18.07.2015), a conference on documenta exhibitions (1997-2017) took place in Kassel. Here are some notes from the conference. The conference was part of the documenta 60 years festivity program. Five documenta Exhibitions were partially presented and discussed. Each documenta had about 3 hours with their curator (Catrine David (d1), Okwui Enwezor (d11), Roger Buergel & Ruth Noack (d12), Carolyn Christov-Bakargiev (d13) and Adam Szymcyck (d14, upcoming)).

They all addressed different topics that seemed important to them, concerning the understanding of an exhibition or making one. One main question was: What potential an exhibition (or biennial) such as documenta can temporarily establish (f. e. as a negotiation space).
Since I am an art educator, I was especially interested in the Educational programs. The first to mention these programs was Ruth Noack (2nd day). Unfortunately, she introduced the topic by showing a photograph of children and an educator, sitting on a floor and watching an artwork, the expression on their faces might be described as concentrated and/or astonished. Noack described the scene by using the words “our art educator”. Still, on d12, many issues were addressed within the art education program. See: documenta 12 Art Education. 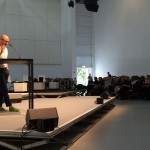 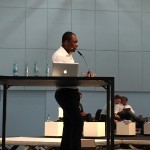 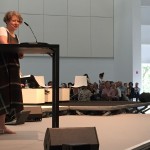 Carmen Amor, Hiwa K and Adam Szymczyk (d14) gave a de-contexualized presentation by showing two videos (by Hiwa K (?)), reading stories (maybe by Hiwa K (?), read by Szymczyk) and performing flamenco songs (Carmen Amor, Hiwa K). Some impressions by the local Newspaper, HNA. The conference ended with closing remarks by Beatrice von Bismarck, Dorothea von Hantelmann and Michael Lüthy.
On Sunday 19th, “Let´s get lost” by Bruce Weber 1988, was shown at the Open Air Cinema by Adam Szymczyk. The film was, as the curator highlighted in his opening remark, a personal choice.

more: Kate Sutton on the conference (Artforum)
All photographs in this post: Gila Kolb, © 2015 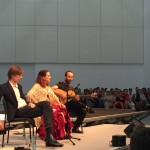 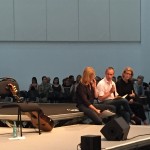 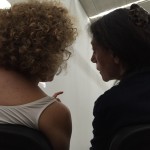 discussion in the first row